A green disk. Coppery lines. Black boxes. Somehow, it looks like a miniature city: fields of grass, houses, and streets. It is integrated into every electronic and electrical device and it is its heart and brain in one. The printed circuit board (PCB). Some PCBs are be extremely complex and may take weeks over weeks of development by a team of electronics experts, other PCBs are quite simple. Sure is, they all will get more and more complicated in the future, hence, designing circuit boards will also get more and more demanding. Therefore, new solutions must be found in the electronics industry. The steps of planning the design and manufacturing the circuit boards will be described in this article.

First of all, it must be considered which elements are needed in the PCB-city. For planning the city, the first stage is a circuit diagram meeting the demands for the PCB. This involves a lot of calculations and simulations. The second step is basically a 2D-map of the city. As third stage the PCB design has to be done, which defines the whole structure and interconnection of a fully functioning PCB-city. The electronic components used on the printed circuit board have to be selected well-founded, which is a very demanding process as it depends on many factors. For example, the environment where the device will be used for which the board is built is important, which can be categorized in the classes A, B and C. Class A means the PCB will be used in consumer electronics, Class B means it is for an industrial and Class C means it will be used in higher end applications, like in the medical or military section. Something that has to be respected when building houses as well. On the technical side, the components have to be compatible with each other depending on the voltage. This all requires a lot of expertise while reading lots of specifications of many different component types from different manufacturers. That is the first step in getting a design for our PCB-city. 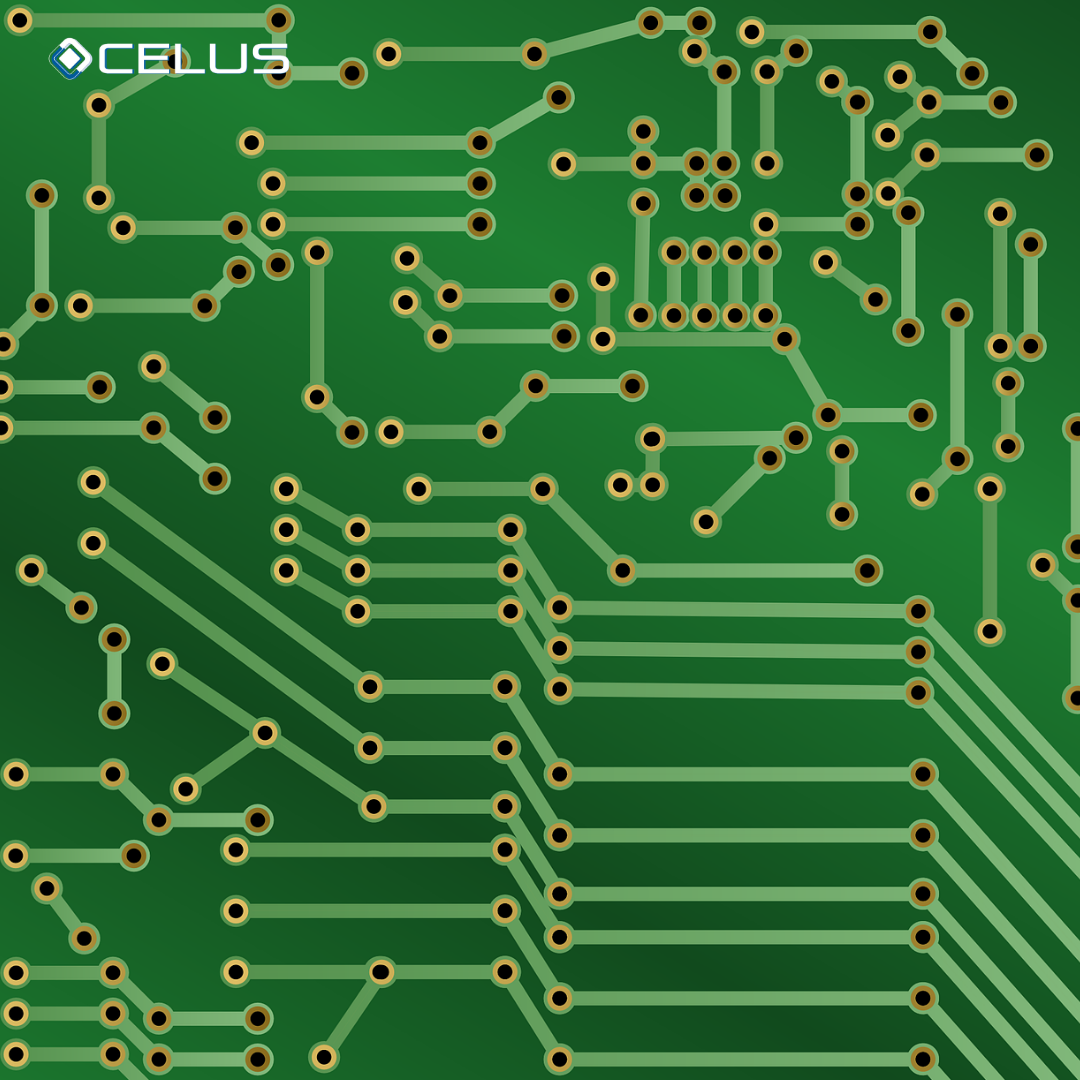 Simplistic drawing of a PCB: routes and holes on a green board

Once it is known what is needed, the engineer starts planning. He or she now has to think about how to arrange the electronic elements in an efficient way. The engineer needs to find the placement on the circuit board, that takes the least space. Whereas he or she also has to keep in mind that the components have to be connected by routes – like streets in a city connecting all buildings. The copper routes must not cross within one layer on the board, otherwise a short will appear. Additionally, the routing should be as orderly as possible making it a clear appearance. As one can imagine, routing is a very complex issue in the design process. Once, it is done, a PCB prototype will be produced and if it does not work properly, the troubleshooting starts. As the worst-case the whole design process has to be done again: If one component has to be changed, it may affect other components; If the routing is wrong, the whole placement must be over thought; If there is a mistake in the circuit, it must be found and corrected. This has been done until the printed circuit board schematics design is ready for mass manufacturing.

Of course, the board is not made of fields of grasses, houses, and streets. The basic material of the board is fiber glass. The board is then topped by a layer of copper foil, which is laminated on it as the bottom layer. The route-network that was defined previously is now printed on the board with a foil that is protecting the copper, where the routes should be. As copper is a conductive material, the goal is to only have the circuit left with routes made of copper. For this, chemicals dissolve the copper between the routes, and it can be washed away until there are only the conductive tracks left. 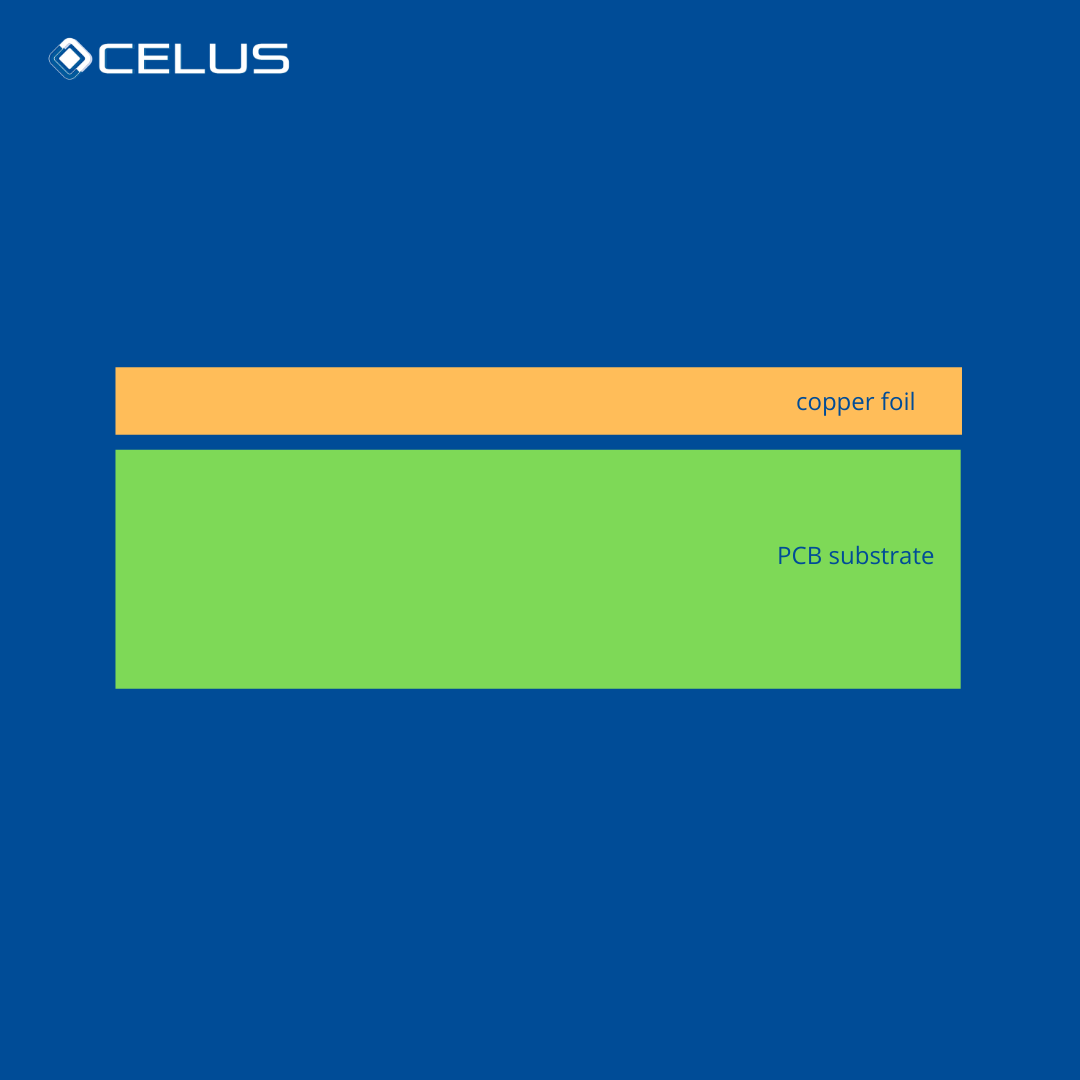 Basic components of a PCB

It is important to insulate the circuit to prevent shorts and hence, another material is laminated on the copper, called the solder mask. That is the typically green coating material for insulating the circuit - the grass fields in the city breaking up the infrastructure. To finalize it, there are white marks laminated on it, the silk screen to make the design clear structured. 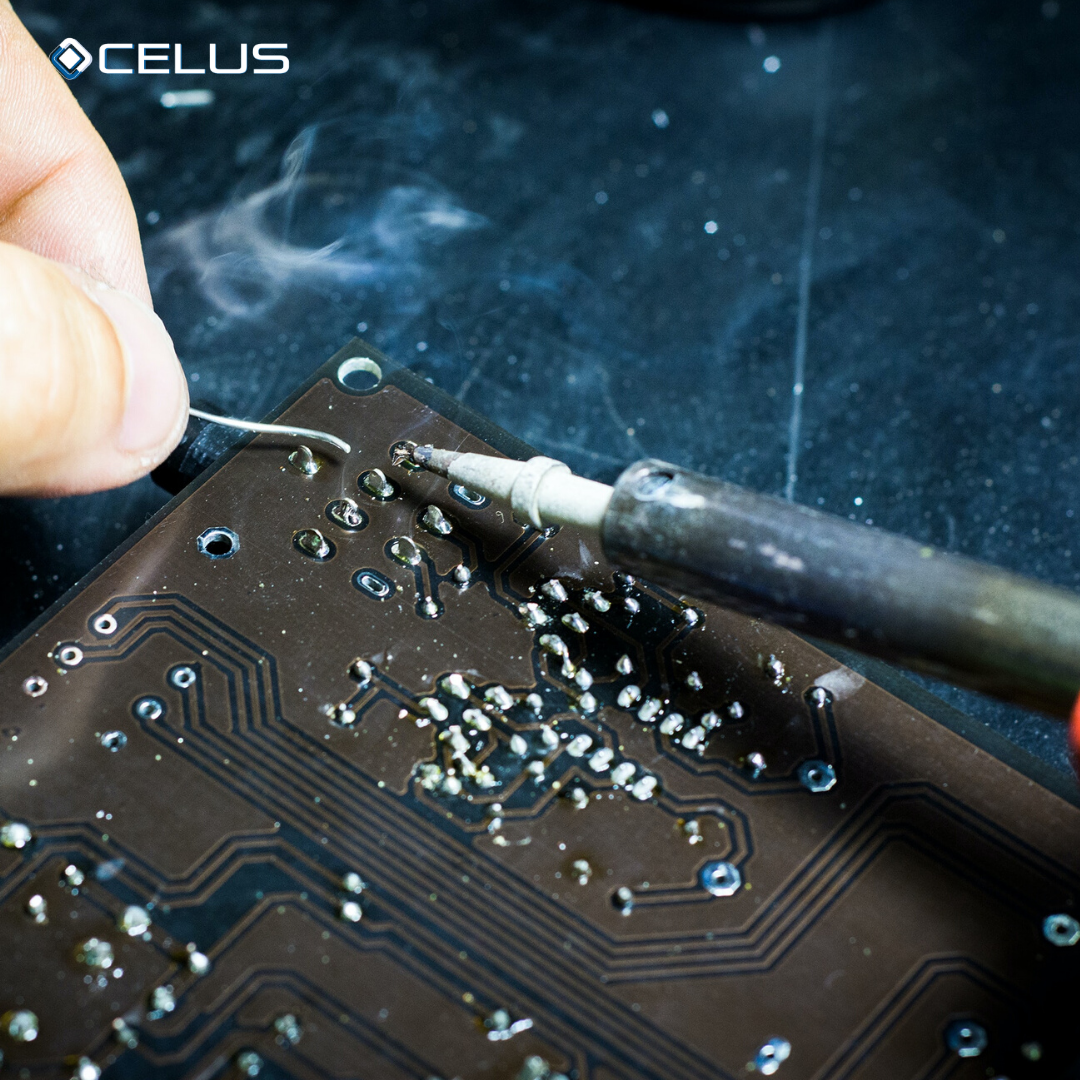 The copper layer of the PCB without the green soldermask layer 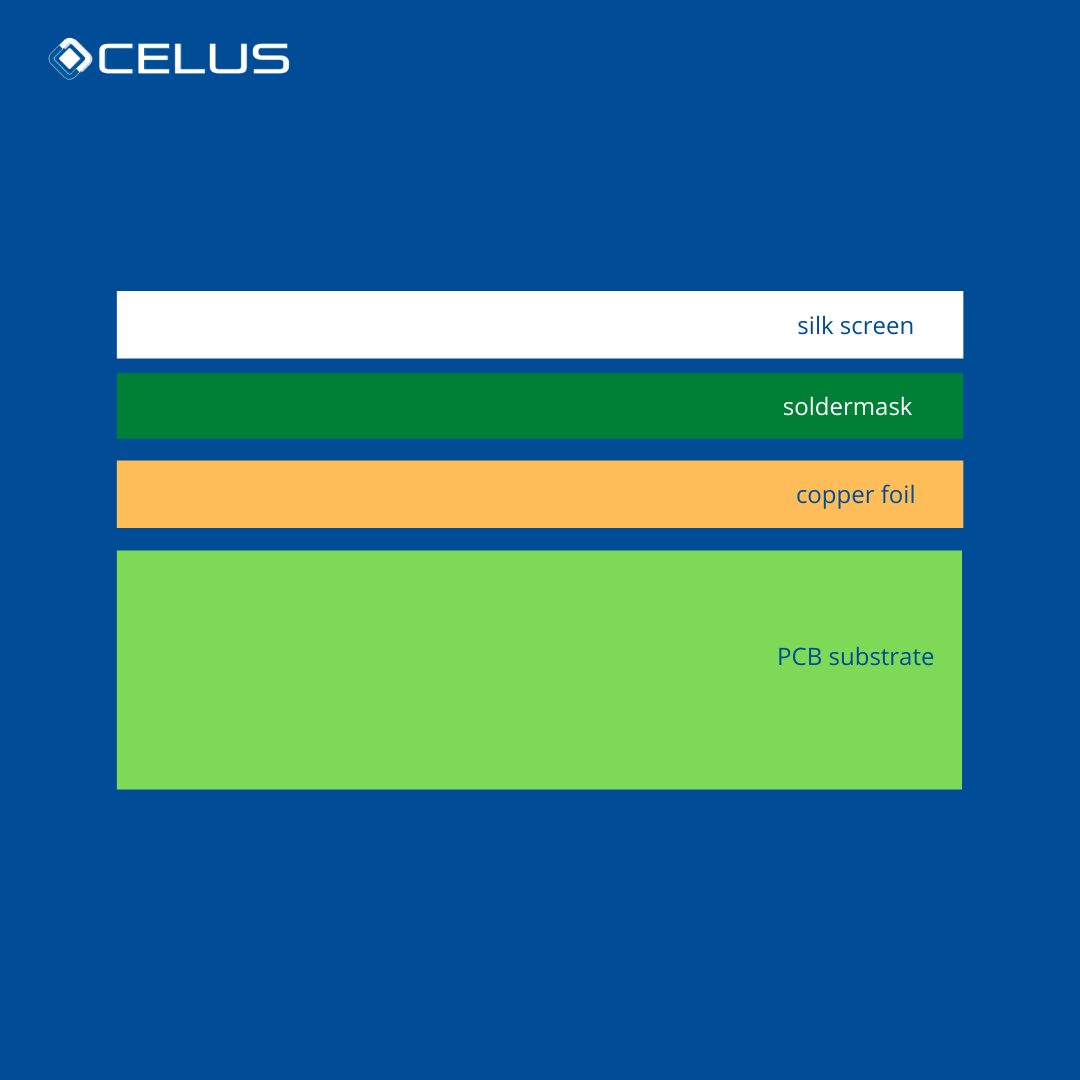 Assemblage of one side of the PCB

This whole process can be done with two layers on each side of the board - if a printed circuit board is multi-layered, the layers must be insulated from each other. Multi-layer PCBsare capable of containing more electronic elements. Especially for multi-layer PCBs in the industry, the production is all done by a manufacturer, however, there are many people, who manufacture simple circuit boards at home as a pastime activity.

Molding the houses on the board

Now, the board has the typically green look with coppery roads and white marks. The only thing missing is now the houses as electronic components. When one has chosen the right ones, they have to be soldered on the board. Invented in the 1960s components on the PCBs are molded on it through a method called through-hole technology. In this process, the components were fasted by a wire going through holes in a board. It is still used nowadays as it is an easy and effectual method to attach elements on the board. 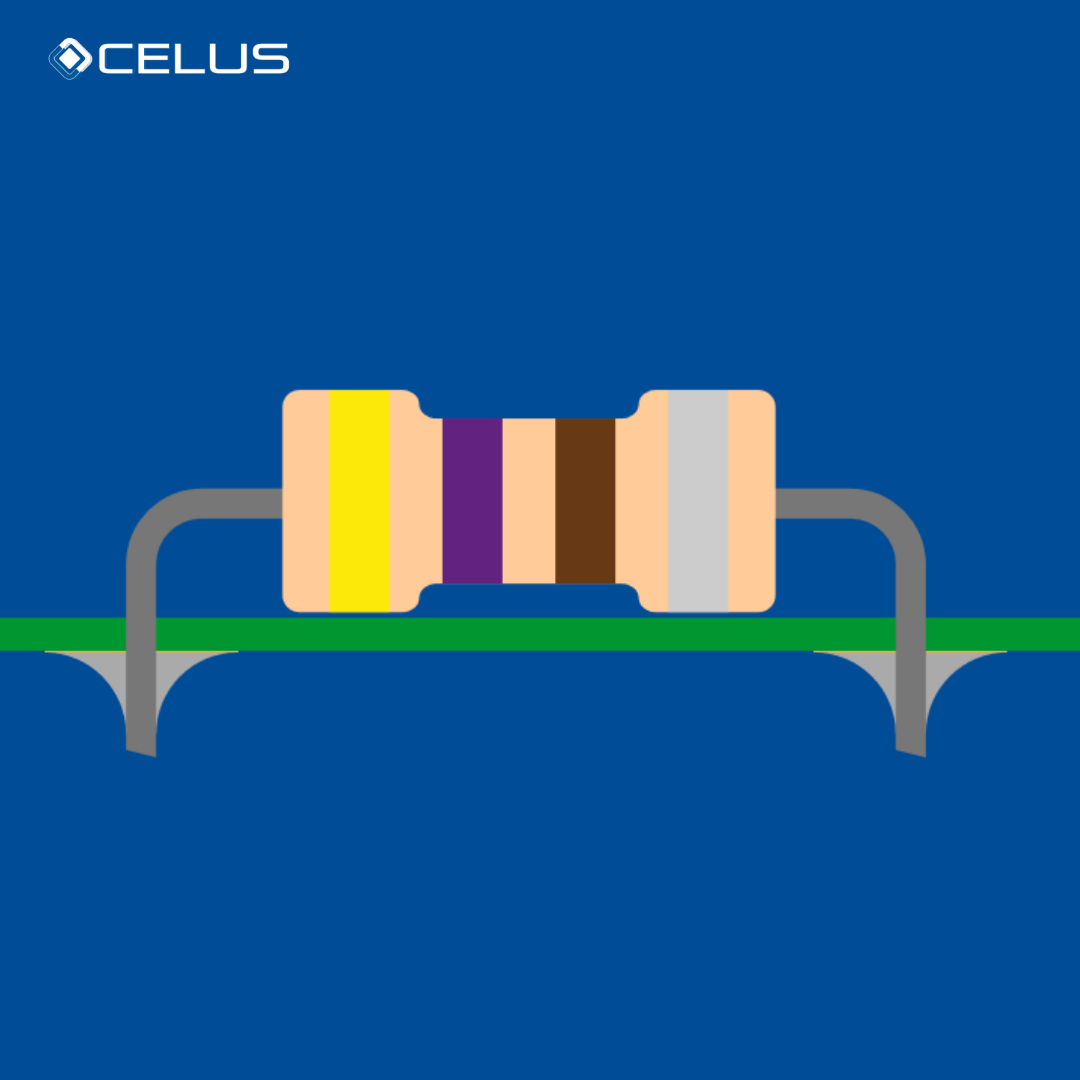 Through-hole technology for mounting components on the board

Back in the days, the whole PCB design process was done with drawing and sketching the schematics by hand. Nowadays, there is PCB design software, CAD-tools, helping electronics engineers to be able to design PCBs faster. Especially implementing changes is a lot quicker than when doing it manually, because some of them are having error analysis programs preventing the engineer from making a mistake that forces him to spend much time with troubleshooting. Getting a prototype with shortages or other mistakes, forces the engineer to redo some steps of the PCB design process. Besides this, it is still a lot of work to be done by electronics engineers to plan a PCB layout. That is why Celus has the goal to revolutionize the process of planning a PCB by automation. Celus Software can do the component selection, routing, and placing all by the touch of a button. The outcome is a circuit board ready for prototype production. This saves work power for more demanding, creative tasks instead of going through pages of lists and the process of try and error in routing and placing.

Learn about the three main reasons to optimize your electronics engineering now with the CELUS...

Spreading the Word about the Revolution in Electronics Design

Celus provides state of the art electronics engineering Software as a Service. With Celus...

Celus provides state of the art electronics engineering Software as a Service. With Celus...